Do you see the human prints? The birds are so much more numerous, they left their mark all over the humans’ prints. Or maybe this is one bird’s prints and he’s just going around and around. Nah.

Both His Wild Highland Lass and Vexing the Highlander are now in print! Working still on Loving the White Bear and Galaxy Warrior.

Have to stop on Flight of the White Wolf (over a fourth way done) to finish edits on Night of the Wolf (for the rerelease of Heart of the Wolf, coming in January). Then back to the book due in April!! 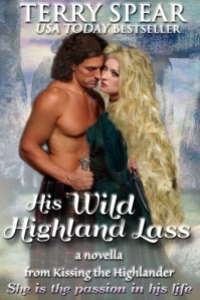 His Wild Highland Lass
Lady Sorcha Barclay has fled her sister’s husband’s castle because of his unwanted advances, except men steal her horse, and she makes the mistake of not keeping to the cover of the nearby forest. An awe-inspiring circle of standing stones capture her attention and she captures the attention of the laird who owns the land.
Laird Ronan Daziel takes Sorcha to his castle to protect her and give her a home, but before long, he wants much more. He’s duty-bound to take a wife whose clan wishes an alliance with his. So why does he long to have something more? Everyone loves the lass just as much as he does. But he has pledged his loyalty to his clan and taking Sorcha to wife could lead to battle on several fronts. How can he not take her for his own when she stole his heart from the first moment he laid eyes on her near the ancient standing stones on his lands?
Note: This is still available in Kissing the Highlander anthology now offered as an individual novella
Amazon
Barnes & Noble
Kobo
iBooks
Smashwords
Google Play: https://play.google.com/store/books/details/Terry_Spear_His_Wild_Highland_Lass?id=Pp2HDAAAQBAJ 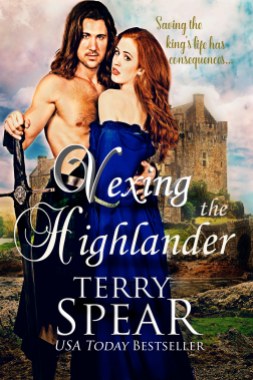 Lady Aila MacIntosh hopes she doesn’t regret the king’s marital choices for her and her sister. Until one braw Highlander bumps into her at the king’s gathering. He’s as taken with her as she is with him, until she learns he is but a commoner, when she is a lady. The king would never make a match between them. Alban of the Clan Daziel meets a beautiful woman at the king’s court, only she is a lady and out of his reach. When the lady and he meet under awkward circumstances, they chance to overhear a plot to assassinate the king. Their lives spiral out of control and losing his heart to Aila is only one of his pressing concerns. Protecting her from those who wish the king dead—his greatest.

Stories get me going. What motivates you?

Have a lovely day!!