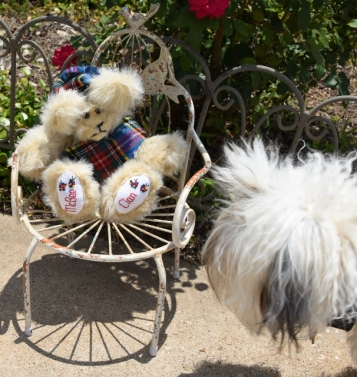 More bears for orders! I have a new MacGregor order I need to make up also now.

But I have to say that after I made the mistake of using weed AND grass killer on my bur weeds, though MOST of my yard was bur weeds, choking out the grass, and I killed off areas of bur weeds AND the grass…then picked up weed ONLY killer, I have GRASS!!!!! It’s beautiful. I never thought it would work that well.

For a long time, the bur weeds looked like they were as healthy as ever, but then they started to turn a little black, and then the grass took over, yes, even where I killed it, and when I was out with the puppies yesterday I realized—I have GRASS! And it’s soft and beautiful. The puppies have grass to walk on instead of bur weeds that were attaching to their fur and paws. They still get a few, but not like they were before. 🙂  I’m not much for chemicals, but with having to take the puppies out in the grass all the time, I had to do something. Every time it rained, I was pulling up the bur weeds, but they were too extensive and the area too massive to work on.

So I’m pretty much weed free. I’ll have to keep monitoring it as I’m sure some of the weeds will propagate again, but now that the grass has really taken hold, it’s helping to keep the weeds at bay also.

And it was so easy!

Off to write. I began a new opening on Billionaire, and it ties in with the original opening, so we’re good!

Have a super great day!

Tanner has his last individual training today, so we’ll see how he does today!